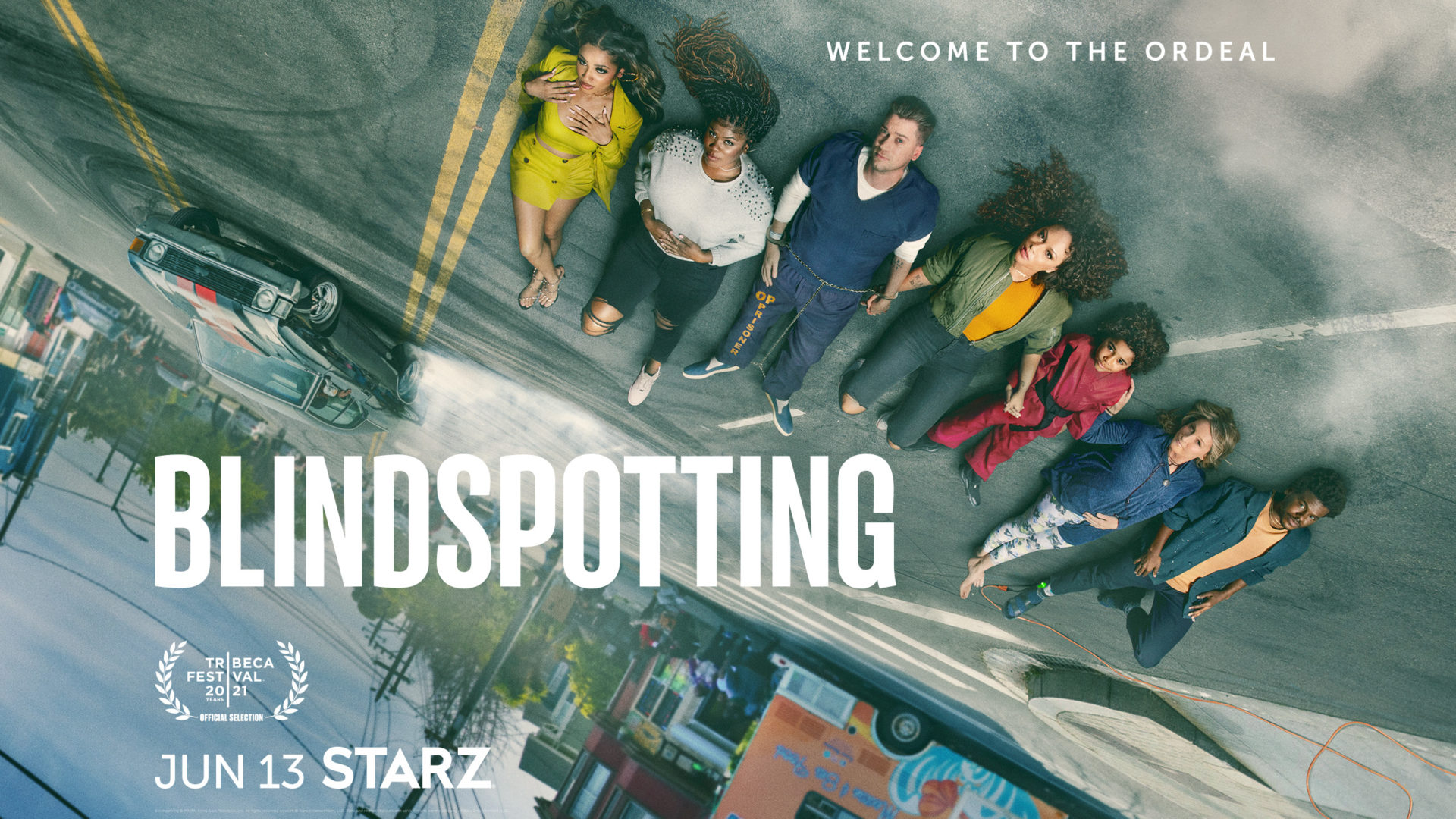 Today I’m super excited to be chatting with actor Rafael Casal, one of the talented stars of the new STARZplay series “Blindspotting”.

So, hello Rafael, wonderful to meet you, finally.

Rafael Casal: Hello hello, thank you for having me.

Sophia Lenore: Oh my goodness, I’m so excited, so first and foremost, I must say this is a very cool and interesting pilot.

So, the characters, oh my god, the characters are very funny and diverse, which makes the series very appealing for my opinion because you have so many really cool interesting rich characters. So KUDOS!

You know kudos to you, seriously, for developing these great funny and unique characters.

So, I’d like to just talk to you a little bit, about the show and about your character, Miles.

So, when you wrote this series, I would love to know, was it your intention to simply continue in the similar direction as the film, in terms of the premise?

Does The Show Have The Same Premise?

Rafael Casal: No. I mean we really wanted to, when we got the opportunity to make the show, we kind of wanted to change the direction entirely.

Right? Like the movie is really based around Colin and Miles’s story and I think for us we wanted to introduce a new starting point with Ashley and meet the people that populate her life.

And so when David and I were conceiving of the show it was really like “whoa who was going to make the most sense to surround this new character this new chapter? Okay gotcha.”

Sophia Lenore: Well, and the term “Blindspotting”, as explained in the film, the 2018 film, is about having a limited perception, the dualism that we cannot see.

Will this be a continued theme in the series at all?

Rafael Casal: Yeah absolutely. I mean, I think it’s introduced in the film so I don’t know that anyone’s gonna like explicitly explain it again in the show.

But I think the hope is that we’ve set up a world, where an audience is constantly wondering if they’re rooting for the right person.

Or if they’re looking at something in the right way and I think that’s a really interesting way to be like.

To go into watching a show is like oh I think this about this person but I know these filmmakers they’d be turning that sh$$$t around on me.

So let me not get too comfortable in my righteousness on who’s right and who’s wrong.

That’s certainly in the show.

Sophia Lenore: That’s so true. I mean your character, Miles, was first introduced to us in the film adaptation of Blindspotting.

So, I would love to know…what has Miles been up to since the last time we saw his character in the film version?

We know that he now has Sean, played by the adorable Atticus Woodward and your son, whom you’re raising with your girlfriend Ashley, played by the beautiful and talented Jasmine C. Jones, who I also interviewed.

Can you tell me what’s going on with him? What’s new? What’s interesting and what has changed since we’ve last seen you in the middle in the film, the character in the film, excuse me.

Rafael Casal: Yeah, I mean I think in the film Miles is really trying to wrestle with a particular anger he has about the changing landscape of where he lives.

And he’s also renegotiating the terms of his friendship with his essentially best friend, like his brother, Colin.

And in that I think that this is a change moment that’s happening in his relationship, where like he’s so used to kind of lone wolf in it and he’s been with the same person for a long time and sometimes you get stuck in these patterns of who you were when you met.

So I always thought of it as like him and Ashley met in high school and they still act, they still operate a little bit like that and the movie was a moment when they were like: it’s done, we’re adults, we’re other people and she knows that because she birthed a child.

But but a lot of times the dudes don’t get it at the same time.

So that was the moment where it was like: all right you’re in.

So I think, yeah or not so, I think what’s happening really with him between the movie and now is, he’s like sort of woken up to the the reality of this of like: oh, we are adults now, we have to function fundamentally differently in the world for our son.

Then, the opening of the show is, Miles is getting dragged out of the apartment and we’re hearing the police saying that they found drugs on him and that and that he’s going to jail.

And I would just urge the audience to not trust the police even in the first few minutes of our show.

What Is Blindspotting About?

Sophia Lenore: That was great because I was going to ask you about that as it pertains to how everything opens, you know, with the first scene and everything.

Because I was going to ask you, after that first scene, you guys live in Oakland, California.

You’re both in your 30s, you’re in this long-term relationship.

You have a six-year-old son together and, yeah, then that whole thing jumps off opening scene.

I don’t want to give way too much, so my whole thing was, how are you going to survive and persevere?

You guys are not necessarily young anymore and you have a child.

So, I was just trying to think of how are you guys going to strive forward past what’s currently happening in the pilot?

Rafael Casal: Yeah, I mean, I think you’re asking the right question, right? It’s not a show about, “oh he’s arrested now let’s see how she gets on with her new single life”.

That’s not how it goes when someone you love goes to prison.

What you’re forced to do is navigate an external system that is super toxic and damaging to communities and families alike, right?

The reason we made this show at this point, at this time, is in the US, there are 2.8 million people in prison.

It’s the biggest prison population in the f$$$ing world and because of that it means that so many communities are constantly affected by the realities of the system.

And so the show is about how people endure that, you know?

Who Is The Villain Of The Show?

That the villain of the show is a system that doesn’t need to be built the way that it’s built.

And what we need to do is watch how this couple and also the entire community that’s around Ashley, these tasks of characters, like Trish and Janelle and Earl and Rainey.

How everyone sort of comes together to figure out how to navigate this thing and that’s really what our show’s about.

What Does the Dancing & Poetry Convey?

Sophia Lenore: That is a great, great way of clarifying because that’s what I was a little nervous about in the beginning as well but I have to transition into these visuals.

Can we please talk about these cool dance breaks and these poetry slam sessions?

What is the show trying to convey to the viewers in these scenes through the use of dance and poetry?

I did ask Jasmine, when i interviewed her, she kind of explained that it’s kind of what they’re feeling inside the characters, feeling inside is being set and played out in these visual dance breaks and musical and poetry slam moments…but I would love to know from the creator and writer, what was your intention with those visuals?

Rafael Casal: Yeah, I mean, I think what me and David and our collective of people who made this show absolutely trying to do with all of this was twofold.

I mean, I think the verse stuff for us is really about…because Ashley is a more reserved character she’s not Trish, right?

Everything is not out. A lot of stuff is being held in. She’s wrestling with a lot internally.

The poetic verse allows us for her to have a moment of intimacy with the audience and go “because I don’t have anyone to talk to because they’ve taken my partner from me, you are my partner now. And I need to tell it to you so somebody knows where I’m at.”

So in many ways the viewer becomes the intimate partner that she’s longing for.

Significance of the Dance

And then I think that the dance is, we wanted to show how the prison industrial complex sort of reaches out into the community and has an effect in sort of literal really overt ways and really sort of less overt ways.

So the dance comes about anytime there’s a massive impact of that system happening on one of our characters.

And so, for example, in the opening sequence when the dancers are helping her move in.

It’s because she wouldn’t have to move if he didn’t get locked up. If they didn’t have to lose their place because the police showed up.

So we just look at those heightened moments where it’s really having an impact and that’s where dance at first starts to appear.

Sophia Lenore: Oh wow, okay, that makes so much more sense and now it I actually love it even more.

Now that I know the reason for it. Right, oh my goodness, thank you so much Rafael.

I had such a such a great time chatting with you. I could talk to you about the show all day. Thank you so much for chatting with me, giving me your time.

It was wonderful talking to you about your show and the hilarious character that you play on the new STARZPLAY series BLINDSPOTTING.

So BLINDSPOTTING premieres June 13th on STARZPLAY. So mark your calendars, make sure you tune in and watch.

Thank you so much for your time again Rafael and have a great day.

Rafael Casal: Thank you so much, you too.