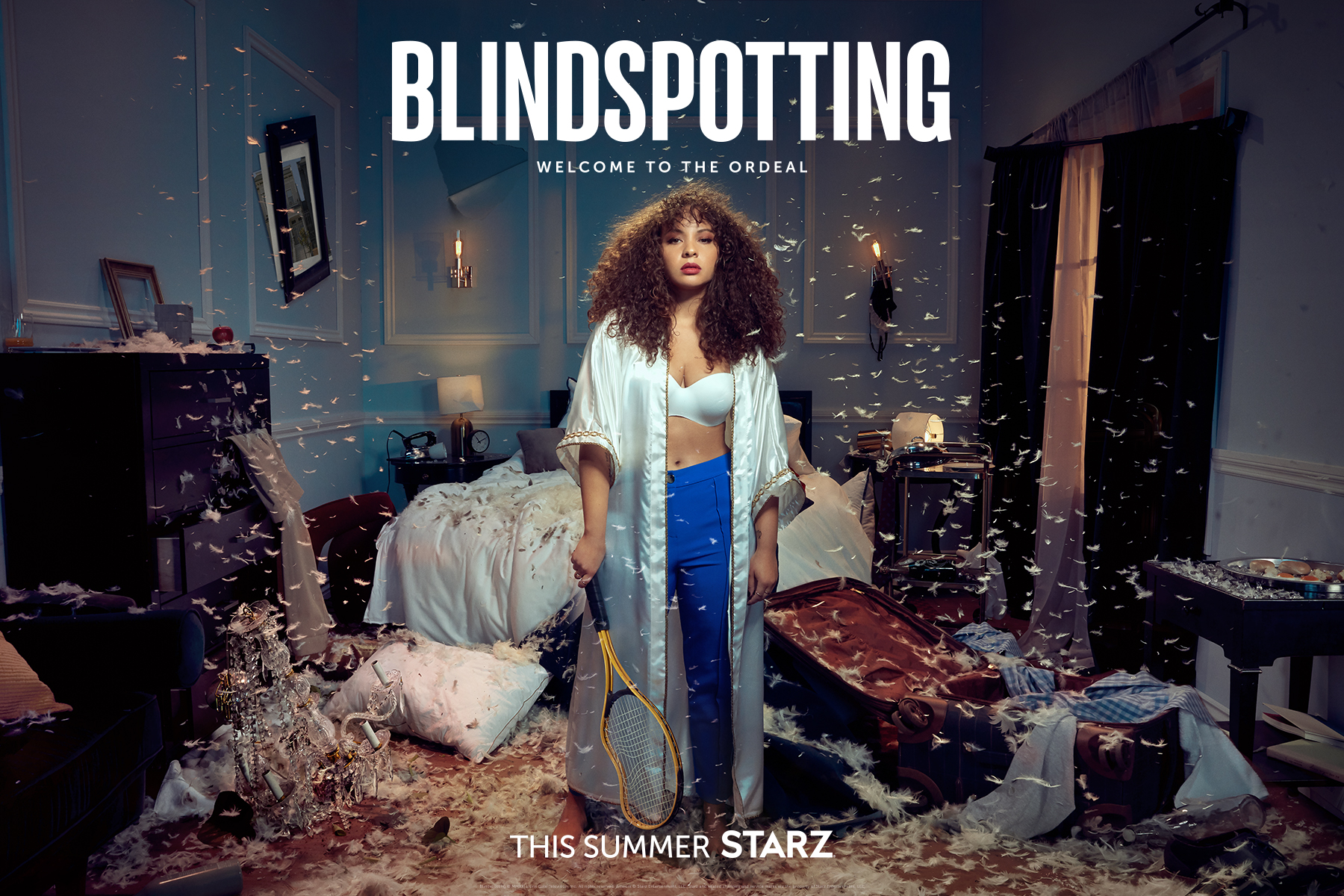 Today I’m super excited to be chatting with actress Jasmine C Jones, one of the talented stars of the new STARZ play series “Blindspotting”.

First and foremost, oh my god, I love the pilot I must say, such a cool and interesting pilot, really. The characters are so funny and diverse, which makes the series so appealing.

So I’d like to talk to you a little bit about the show and about your character specifically. Yeah? So let’s get on in.

So, “Blindspotting” is a new STARZ play dramedy series based on the 2018 film Blindspotting. Will the series continue in the same direction as the film with regards to the premise? Do you think?

Jasmine C Jones: With the premise? No. I think it continues six months after the film and the premise of the film has to do with two friends and best friends and how they navigate in the world, being two different colors and also the prison system and how that affects both of them.

I think in the TV show I play the same character in the movie but it’s through Ashley’s eyes. Then it’s a different setup that we have and it’s Miles.

Her life partner is sent to prison and she has to move back with his mom and his sister, who she has a lot of tension with, and she has to navigate almost this new life that she has through it all.

What Does Blindspotting Mean?

Sophia Lenore: I see. I noticed there are a bit of changes since the film. I just wanted to know whether or not going further into the episodes, where we see a little more of the shenanigans that the film brought to the table.

So, but in regards to the term “Blindspotting” as explained in the 2018 film, the term is about having a limited perception. The dualism that we cannot see…will this also play out at all in the series as it pertains to the term, which is the title of the show?

Jasmine C Jones: Yeah, I think everybody kind of has their own blind spot in their own right. I think Ashley’s blind spot is that she feels like she is alone and she has to do everything herself.

She has to be a perfectionist as a mother, as a partner and as a friend and I think what she starts to realize and how her blind spot changes is that she does have a support system and it’s not the most perfect support system but there are people that are there for her and she doesn’t have to go through this alone.

Sophia Lenore: You’re absolutely right and we see that her current support system is a little out of her comfort zone but you’re right. She does have one but she still has to kind of figure things out on her own, which I do love also about the series that you’re kind of like starting out on your own, not really but yes.

How Is Ashley Going To Move On?

So I wanted to know, your character, Ashley, lives in Oakland, California. She’s 32 years old, she’s raising a young child alone while her boyfriend is in jail for an unspecified amount of time as you mentioned. How do you think she’s going to survive and persevere?

She’s not necessarily young anymore and she’s living, like we just mentioned, in a situation that’s not the most ideal for her and her son.

Jasmine C Jones: I think that’s the whole question of what is she gonna do and how is she going to navigate this new world that she has.

I think one of my favorite things about Ashley is that she is very strong even if she doesn’t believe it. She’s kind of this unsung hero of a lot of mothers and a lot of women that are that are out there.

She doesn’t have a cape. She doesn’t have superpowers. Yet through every single situation she makes it out on the other side and does the best that she can. I think the audience can trust that about her.

She is not perfect and I just think she does the best that she can under the circumstances and especially her son. I think she always tries to present the best version of herself from her son and whatever emotions and feelings she goes through, especially when she breaks the fourth wall and decides to share that with the audience, she lets it out.

I don’t even think she really understands how therapeutic that is and how much she’s on track when it comes to that.

What Does the Dancing & Poetry Convey?

Sophia Lenore: Oh man, you’re so right and speaking of letting it out. I wanted to briefly just get a little feedback from you in regards to the cool dance breaks and poetry slam sessions that actually are featured in the show.

Ashley is always like throwing down you know in her private mind.

So, I would love to know, what is the show trying to convey to the viewers in these scenes, through the use of dance and poetry?

Jasmine C Jones: I just think it’s a unique way of storytelling and it’s one of the amazing things about Rafael and Diggs, like they are very theater people.

They have music in their background they are rappers, they are poets. A lot of this is embedded in them and they express it through this show.

The choreography of the show is basically like a Greek chorus and kind of explains, which is a very theatrical thing. It really creatively expresses what kind of emotion is going on in that moment and in that scene.

The heightened verse is when the audience gets to really understand what Ashley is feeling because her performance is not influenced by any other character in the show.

It’s just completely her. If you’re wondering what Ashley really is feeling when she gets to that moment of a heightened verse and breaks the fourth wall and shares it with the audience…that’s how you know what’s really going on with her.

Favorite Part Of The Show?

So, I just think you know it’s one of my favorite parts of the show. It’s what I love about the show and just another creative amazing way of storytelling and to really use comedy and performance art to kind of express the times and the situations that I think a lot of people can relate to in some shape or form.

Sophia Lenore: That’s so on point and that’s actually what I was thinking but I wanted to know, from your perspective, what was being conveyed.

So, oh my goodness, Jasmine, thank you so much for chatting with me today. It was wonderful talking to you about the show, about your strong opinionated and lyrically talented character.

So I just want to let everyone know that “Blindspotting” premieres on June 13th on STARZ PLAY, so mark your calendars and make sure you tune in to watch.

Thank you so much again Jasmine you have a wonderful day!