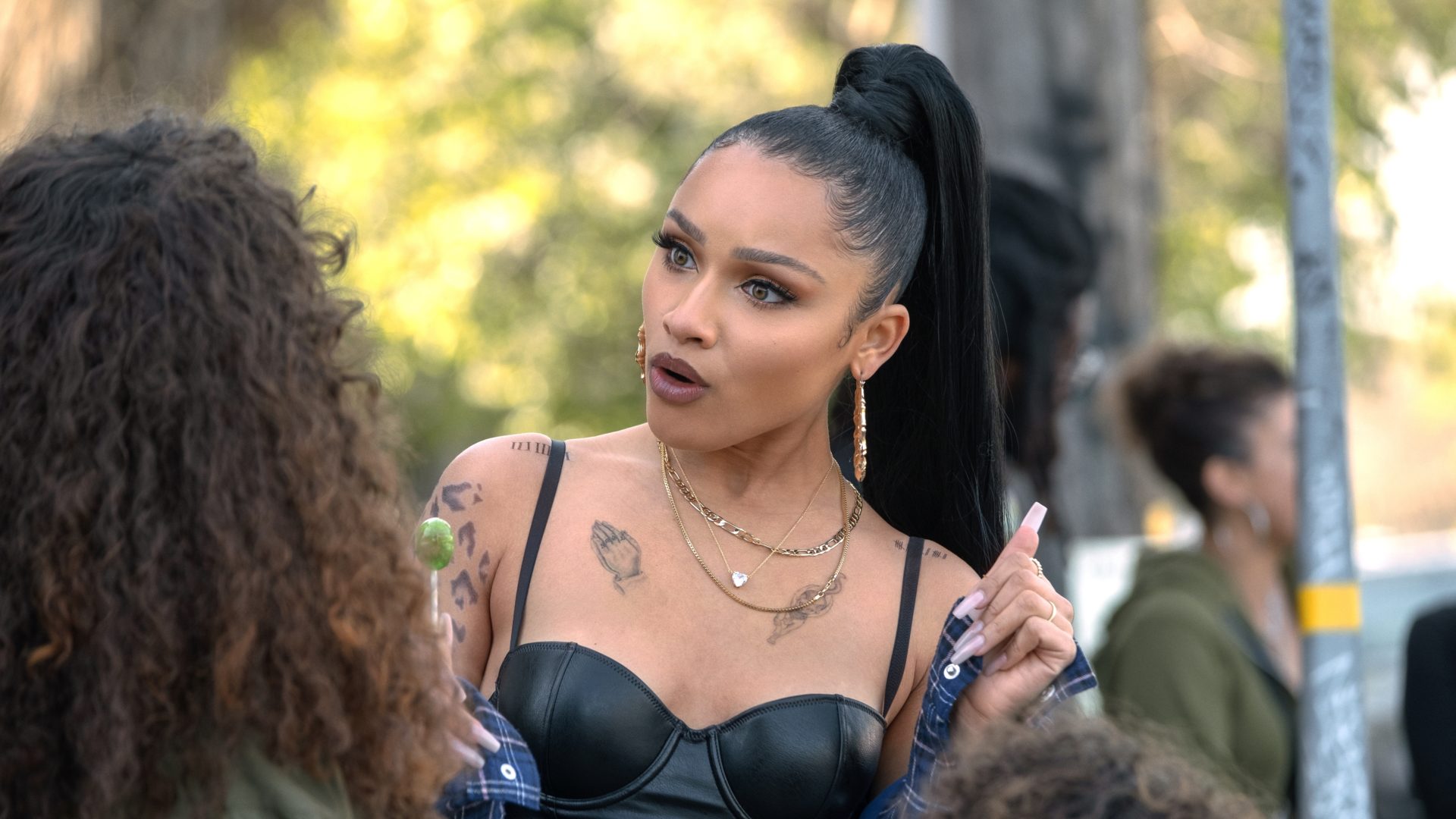 “BLINDSPOTTING” interview with Jaylen Barron. The actress sat down to chat with CANDID & DIVERSE’S Sophia Lenore about her new Starzplay’s series – it premiered on June 13th 2021.

Sophia Lenore: I’d like to talk to you a bit about yourself, the show and your character Trish. Is that okay?

Jaylen Barron: That sounds good to me.

Sophia Lenore: All right, let’s get on in. So, I like to start by giving our viewers and readers a bit of background about yourself.

It’s east of L.A. and then, when I was younger, from La Puente I moved to the Inland Empire. So, I’m from Fontana.

Yeah, I’ve been in California my whole life but I am Mexican and Black.

Sophia Lenore: Okay, thank you so much for clearing that up because I just have to say when I was doing my research on you I was trying to discover what’s this background, what is this mix?

But when I saw that you are Black and Mexican I said to myself “okay, so that is where the spiciness comes from”.

That is why Trish is so dope, seriously.

Jaylen Barron: The best of both worlds.

Sophia Lenore: Precisely. Well, Jaylen, can you please tell our viewers and readers a bit about your character, Miss Trish, the entrepreneur? What kind of woman is Trish? What are her aspirations, her goals? Let us know!

Jaylen Barron: Ms Trishy, Tricia, Trish…how, where can I even start with her? She is extremely loyal. She is very ,very…I want to say she’s very dimensional because she has a lot of different layers to her.

It’s like, wait, does she love Ashley? Does she not? And the truth is she does love Ashley.

She’s just hurt by her but Trish is fun and she’s loyal. She loves her family, no matter what. Obviously you can see from the first episode and she gets things done. That’s really what I love about Trish.

Sophia Lenore: You’re so right. She does get things done.

Jaylen Barron: In her own way she gets what she wants. She makes it happen.

Sophia Lenore: I love that and I would love to also talk a bit about these cool dance breaks and poetry slam sessions that appear on the show.

What is the show trying to convey to the viewers in these scenes through the use of dancing, poetry and can we expect some dance or some dope poetry or some dope freestyle rap from Trish in upcoming episodes?

Jaylen Barron: Okay, So I’m gonna answer the first part of the question. The way they’re expressing their dance and the poetry is all out of emotion.

So everything that Ashley is feeling inward they’re projecting outward. So not only is the audience seeing her emotions on her face but everything around her.

So, if you notice, they’re all moving around fast and having these beautiful expressions on their faces. Then, when she’s in the penitentiary, visiting Miles, it’s sad and so their hands are on the window and they have these expressions and these slow movements going on.

So I think they do a really great job of expressing her emotions outward. It kind of brings you a little bit more. Not only is she acting but there’s music going on around her.

There’s movement going on around here and I think that’s also what drew me to the script is that aspect of dancing and poetry. I’ve never seen a show do that before.

So I was really happy everybody got to see that and as far as Trish, you might see a little dancing but it’s in a different way than what these beautiful dancers are doing around her.

But rapping? I don’t know…this season you’re gonna have to watch.

Jaylen Barron: I can’t give you all the tea. I gotta keep the audience guessing, otherwise I’m giving everything away. So I gotta drop a little breadcrumbs here and there. Y’all go ahead and watch it.

Sophia Lenore: I love it. That’s what I’m anticipating. If she busts out in a freestyle…oh I’m about to be Trish fan number one.

Well, moving forward into the upcoming seasons and such becauseI love the pilot but how do you see things evolving with Trish and Ashley?

Will there be more vicious yet hilarious fights between the two ladies or will we learn to truly love each other and live in harmony?

I know you mentioned earlier that you do love Ashley. It’s just very under the surface right now.

Jaylen Barron: Like I said, you never know what you’re gonna get with Trish but you can expect Trish to try and mature. As well as actually try and mature and understand each other’s perspective.

Of course, they’re like sisters, there’s going to be fights. There’s going to be disagreements, like the other family, but where I want to see Trish go is growing and learning and maybe being a little bit more sound with her surroundings.

And I would love, love, love to see Trish try and get a regular job just for fun. I’d want to see how she would handle that. I want to see what she would think of customer service or something like that. That would be pretty cool, just off her doing it as a joke.

Sophia Lenore: That’s actually perfect segway into my next question because I was actually going to ask you what can we expect from Trish as the season unfolds?

Jaylen Barron: I can’t give this away, I can’t do it.

Jaylen Barron: I understand that and the way you’re writing these questions… I’m like, I just can’t answer that but I’m like, wait, no, hang on a second…I need you, it wasn’t for nothing now, I’m just kidding…I would say the best way I can answer this question is she will make it happen, one way or another!

She’ll make it happen but then that brings us just to hopefully…if there’s a season two that’ll bring us to a season two and you guys will just have to watch Trisha’s little roller coaster emotions and her whole game plan unfold.

Sophia Lenore: Oh man, there better be a season two.

Jaylen Barron: I’m ready for another bag…let’s get it done, you know? That’s what I’m saying, season two, let’s do it.

Sophia Lenore: There better be because I am so addicted to Trish.

Jaylen Barron: Didn’t you love that scene with Candice in the kitchen with her spatula? Did you see that? Let me tell you that girl is so good and she’s so real with what she’s talking about.

Sophia Lenore: What I have to say, in regards to the show, I really love that you never really know how the scene is even going to play out.

You absolutely never know what the hell is going to come out of Trish’s mouth or how she’s going to respond.

Jaylen Barron: Is she a Gemini woman because I’m getting real Gemini vibes from her. No, no, she’s a Sagittarius.

Sophia Lenore: Okay, we gotta find out what her rising moon is and all these other things.

Well I have to say, Jaylen, thank you so much for chatting with me today. It was so wonderful talking to you about the series and about the strong opinionated, driven character you play in Miss Trish.

I want to just tell everybody that Blindspotting premiered on June 13th and you can watch a new episode of blind spotting every Sunday night on STARZPLAY.

Thank you have a wonderful day.