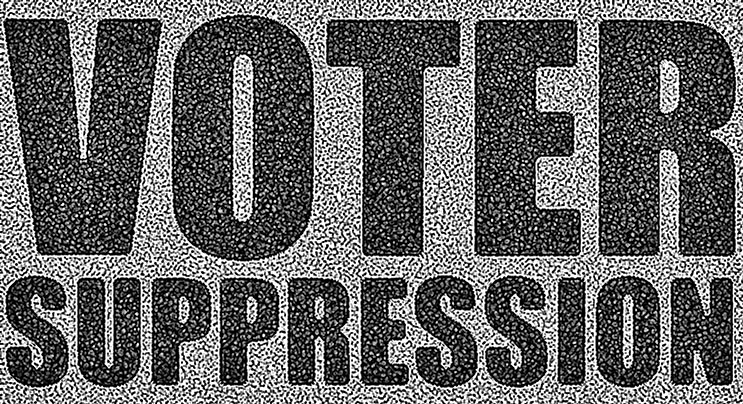 The past election in Georgia was historical and reached the national spotlight for its massive voter turnout, particularly in the Black community, which sparked an enormous victory for Democrats with the electing of two Democratic Senators and a historic shift to a left-leaning President.

As a result of these efforts, last month, Republicans in Georgia forged ahead in passing a state-wide 98-page bill packed with new laws that greatly restrict voting access.

Here are seven ways in which the new law restricts and affects Georgians in upcoming elections.

1. Change In Georgia Voting Law: Window to Request an Absentee Ballot Is Now Less Than 3 Month

“Not more earlier than  78 days or less than 11days prior to the date of the primary or election, or runoff of either, in which the elector desires to vote, any absentee elector may make, either by mail, by facsimile transmission, by electronic transmission, or in person in the registrar’s or absentee ballot clerk’s office, an application for an official ballot of the elector’s precinct to be voted at such primary, election, or runoff.

To be timely received, an application for an absentee-by-mail ballot shall be received by the board of registrars or absentee ballot clerk no later than 11days prior to the primary, election, or runoff. For advance voting in person, the application shall be made within the time period set forth in subsection (d) of Code Section 21-2-385.”

The law makes it illegal for election officials to mail out absentee ballot applications to all voters. Section 25. Page 39 states:

No person or entity other than a relative authorized to request an absentee ballot for such elector or a person signing as assisting an illiterate or physically disabled elector shall send any elector an absentee ballot application that is pre-filled with the elector’s required information set forth in this subparagraph.

Handling a completed absentee ballot application by any person or entity other than as allowed in this subsection shall be a misdemeanor.”

There will be significantly fewer drop boxes for mail-in voters under the new law. To put this in perspective, there were 94 voter drop boxes in the 2020 election for the most populous counties in the state of Georgia (Dekalb, Cobb, Fulton, and Gwinnett), which also constitutes the largest population of minorities.

Under the new law, this number would significantly drop to 23 at most for the four counties based on the most recent voter registration data. Section 25. Page 47 states:

Any additional drop boxes shall be evenly geographically distributed by population in the county. Drop boxes established pursuant to this Code section shall be established at the office of the board of registrars or absentee ballot clerk or inside locations at which advance voting, as set forth in subsection (d) of Code Section 21-2-385, is conducted in the applicable primary, election, or runoff and may be open during the hours of advance voting at that location.”

4. Change In Georgia Voting Law: Early Voting Hours Are Disproportionate To The Population

Early voting hours are disproportionate to the population, curtailing voting access for populous counties. Counties are also given a choice not to allow early voting access on Sundays. Section 28. Page 59-60 states:

Voting shall be conducted d̶u̶r̶i̶n̶g̶ ̶n̶o̶r̶m̶a̶l̶ ̶b̶u̶s̶i̶n̶e̶s̶s̶ ̶h̶o̶u̶r̶s̶ beginning at 9 a.m. and ending at 5 p.m. on weekdays, other than observed state holidays, during such period and shall be conducted on the second S̶a̶t̶u̶r̶d̶a̶y̶ and third Saturdays during the hours of 9 a.m. through 5 p.m. and, if the registrar or absentee ballot clerk so chooses, the second Sunday, the third Sunday, or both the second and third Sundays prior to a primary or election during the hours o̶f̶ ̶9̶ ̶a̶.̶m̶.̶ ̶t̶h̶r̶o̶u̶g̶h̶ ̶4̶ ̶p̶.̶m̶.̶ determined by the registrar or absentee ballot clerk, but no longer than 7 a.m. through 7 p.m.

Page 60: Except as otherwise provided in this paragraph, c̶o̶u̶n̶t̶i̶e̶s̶ ̶a̶n̶d̶ ̶m̶u̶n̶i̶c̶i̶p̶a̶l̶i̶t̶i̶e̶s̶ the registrars may extend the hours for voting b̶e̶y̶o̶n̶d̶ ̶r̶e̶g̶u̶l̶a̶r̶ ̶b̶u̶s̶i̶n̶e̶s̶s̶ ̶h̶o̶u̶r̶s̶ to permit advance voting from 7 a.m. until 7 p.m. and may provide for additional voting locations … to suit the needs of the electors of the jurisdiction at their option; provided, however, that voting shall occur only on the days specified in this paragraph and counties and municipalities shall not be authorized to conduct advance voting on any other days.”

5. Change In Georgia Voting Law: Poll Hour Extensions Will Be More Challenging To Obtain Or Navigate Under The New Law

Should a mishap or problem occur at a polling location such as a malfunctioning machine, power outage, or a technical issue such as the Pennsylvania outage fiasco we saw this past election, it could become more difficult to extend voting hours under the new provisions.

“Poll hours at a precinct may be extended only by order of a judge of the superior court of the county in which the precinct is located upon good cause shown by clear and convincing evidence that persons were unable to vote at that precinct during a specific period or periods of time.

Poll hours shall not be extended longer than the total amount of time during which persons were unable to vote at such precinct. Any order extending poll hours at a precinct beyond 9 p.m. shall be by written order with specific findings of fact supporting such extension.”

The new law would hand over the legislative right to refuse election results, giving them the power to suspend local election boards and stripping power from the Secretary of State. Section 5. Page 8 states:

7. Change: Misdemeanor For Offering Food Or Water To Voters

You can be charged with a misdemeanor for offering food or water to voters waiting in line. Yes, you read that right. According to page 73 of the bill, the law makes it an offense to give away food or water within 150 feet of a polling place or 25 feet of any voter in line. In addition to the charge, you can potentially face a year in jail and a $1,000 fine.

According to findings by Georgia Public Broadcasting and ProPublica there was a significant disparity in line wait times for majority white neighborhoods vs non-white.

After the 7 pm scheduled closing time, the average wait time was 51 minutes in polling places that were 90% more non-white compared to a six-minute average wait where 90% of voters were white.

This Code section shall not be construed to prohibit a poll officer from distributing materials, as required by law, which are necessary for the purpose of instructing electors or from distributing materials prepared by the Secretary of State which are designed solely for the purpose of encouraging voter participation in the election being conducted or from making available self-service water from an unattended receptacle to an elector waiting in line to vote.”

These are just a few items in the 98-page bill. There is so much more to unpack. The message is clear that we must continue the fight to charge more assertive in exercising the right to vote. It is our power. Otherwise, they would not be so adamant in taking it away.

I encourage you to make space to read through the bill, even if you do not reside in Georgia. More of these bills are on the rise in other states, and we must push back to press forward.