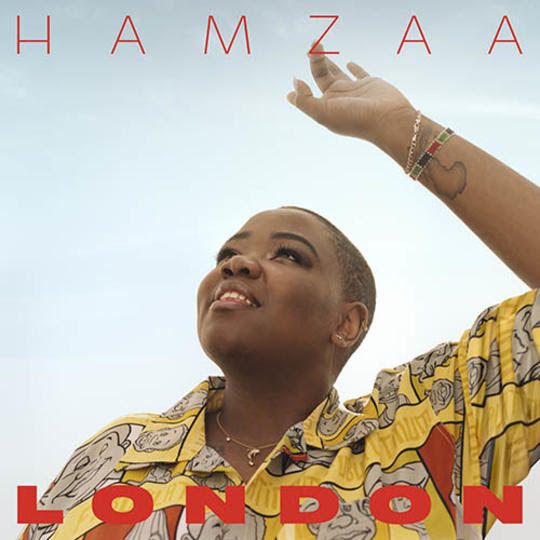 Hamzaa Debut Album Review & Interview: find out what the album is about, how many tracks are featured and what Hamzaa has to say about Berlin’s music scene.

Good music is what soul food is to the T buds, a safe space away from the chaos of the world, a momentary mood lapse to that better place. In our quest for the ear manna, we take a walk through the winter laden streets of London to the doorstep of a beauty in persona and vocal delights; Malika Hamzaa.

Already at an impressive 1.4 million streams on Spotify and Apple Music UK, Hamzaa, the rising new voice of the generation is at a linear ascend to capturing hearts with her raw and honest emotion behind her exceptionally expressive lyrics.

This is made more the poignant through her debut album, First Signs Of Me, speaking to the young, the old and everyone in between with a sense of belonging and purpose, taking each person along on a journey of healing and restoration in the calm that eludes in the soft lyrical masterpieces.

Driving down to work, on a particularly cold morning, my car speakers blaring out, “Hard To Love,” the rich melody, the candid appeal to soul searching love and the deep notes of intimacy in the few minutes that Hamzaa took me to a relatable expanse made me feel connected in a way that was almost unreal.

Time stood still, the chords transported me into a vortex where the two of us existed alone, in silence, Hamzaa mirroring what could have been my thoughts. It was a magical moment to say the least.

In a bid to stroke my senses with more of her spell, I parked my car alongside the road and closed my eyes to drink in the next few ticks that was captivated by the rush of her entire album.

It is an enchanting memory. That’s Hamzaa to the unsuspecting listener. Her music would lift you up in a high, dulling your senses in sweet nostalgia, reminiscence, celebration of victory in pain and blissful hope.

I would say her music is symbolism for aspiration, in all its undiluted nobility. “First Signs Of Me,” Hamazaa’s debut album, entails a whopping 6 tracks:

The album converses of apparent heartbreak and pain, uncovered in the naked details, tender scars, intense emotions and passionate love. She is brought into worldwide acclaim through the lyrics she pens that captures all fans in an empathetic and approachable territory.

Her pain becomes everyone’s pain or is it the other way around? She expertly arrests everyone’s heartbreak and seals it within the lines she puts to music. Hamzaa is a voice for every tear that dropped that wasn’t acknowledged, she is the free expression of sentiments that went under spelled.

Just at a tender age of 19, the R&B/Soul Singer, songwriter, producer and accomplished pianist, Hamzaa is staging indicative signs of being a house hold name.

Armed with a great fandom, Hamzaa continues to rise in applause and cheer from her ever increasing supporters all around the globe.

She hints of astounding projects in the time to follow and advises her fans to keep their “eyes and ears peeled because I have some really, really cool projects coming up.”
And we’ve got to say, we just can’t wait.

Now let’s jump into the interview with Sophia Lenore!

Sophia Lenore: Who is Hamzaa? Or what do you want people to say when they describe Hamzaa as an artist?

Hamzaa: She is an artist that is growing and evolving. I have a very unique sound and style.

Sophia Lenore: I read that you are an accomplished pianist; it is true you started playing piano at 4 and started writing songs at 9 years old? What encouraged your desire to venture into music at such a young age?

Hamzaa: Yes, this is true. I’m no Mozart, haha. I do pretty well.

Sophia Lenore: The video for ‘London’ feels so pure and organic, your just hanging out with friends, lounging eating, drinking and having a good time. The video features a few beautiful random Londoners’ with quite a lot of emotion in their eyes and on their faces.

I am very involved but I am also very open to my teams and their feedback and visions as well. Overall it is a team effort. I am very new the industry and I want to learn. In order for me to learn I have to listen to the feedback and professional opinions of my team. I’m pretty new to this, so I listen to the professionals around me. I have some good people.

Sophia Lenore: The video for London feels very nostalgic and the song has anthem potential written all over it. There is one line in the chorus that I am a bit curious about regarding it’s meaning. What is the meaning behind the line “The devils in the street, desperate to escape the dark, not like we used to be, but you’ll always find love in my heart for London.”?

Hamzaa: It is about the darkness under the surface. There are a lot of things changing in London and not everyone is happy about it.

Sophia Lenore: Your debut EP is six-tracks of perfection, it’s a beautiful collection of work!
On the album, you sing about heartbreak, love, life and struggle with such raw and honest emotion. Was this album a journey of self-reflection? Or was the album a form of release for you? I ask because the album also seems very personal.

Hamzaa: Yes, I went through a very dark time in my life and this was therapeutic for me. Writing this album was like writing in a diary. It was a release and now that dark time is behind me and I am ready to heal and move forward in my life.

Sophia Lenore: Last month you performed a music showcase at Gretchen Berlin and I heard that you killed it! Do you come to Berlin often? Do you like the music scene in Berlin? Are your German fans very different from your London fans? Did you feel the love in Germany?

I like the Berlin music scene, it’s cool! Yes, my German fans are different from my London fans. The Germans are more aggressive, which is so cool. They’re just like “Hey let’s take a photo!” and I’m like “OK, haha”. Love it, haha. My London fans are more like “Yeah, your cool. Ok” and that’s that, super laid back and chill. Haah, I love that too!

Sophia Lenore: If you can choose one artist right now to either open for, or tour with whom would it be?

Hamzaa: Wow, dead or alive?! Oh wow, ok hmm. Well let’s keep it fresh…I’m gonna say ——. Yeah, I love their music! I think I would have a great time touring with them and being on stage with them!

Sophia Lenore: Let’s change it up a bit. What would you say is your signature style? What brands, or designers do you like to wear?

Hamzaa: Wow, that’s a good question. Hmmm, well I do not have a favorite designer or brand currently so I can’t really name specific designers. I just love cool jackets, edgy pants and just being stylist. My style is fashionable but sexy.

Sophia Lenore: What does the future hold for Hamzaa? Will you be traveling? Touring? Any up coming collaborations?

Hamzaa: I have a few things about to launch very soon. There is definitely new music on the way. I will be performing at a some festivals and making several appearances on different platforms during the top of the year. Make sure you keep your ears and eyes peeled because I have some really, really cool projects coming up!

The Black Woman: The Jewel of Earth